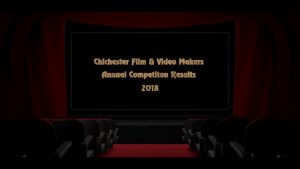 Following our traditional supper, the show was presented by Vice-Chairman Clive Hand with the help of a selection of CFVM Members and our Club President.
The in-house awards were announced first

THE ONE MINUTE COMPETITION
for films not exceeding 60 seconds duration.

THE JOHN WRIGHT AWARD
for most humorous entry

THE JOHN PHILLIPS MEDALLION
for the Best Commentary

THE FORMBY CUP
for the Best Sound Track

THE GIBBON'S SHIELD
for the Best Edited entry

THE FOUNDERS CUP
Best film of the year

THE PEARMAN AWARD
The membership voted that for clubmanship, exceptional contribution to the club throughout the year, should be presented to